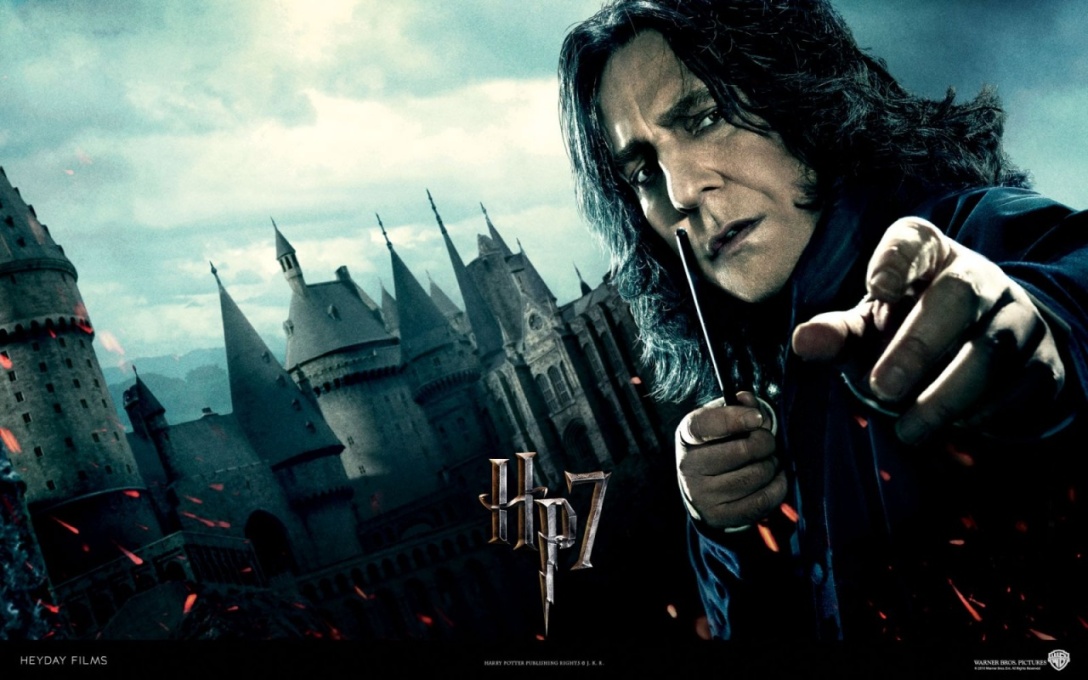 I have gathered here some quotes from William Shakespeare whose words will live forever. I found some things that describe, at least in my own opinion, very well the character of Severus Snape.

Cowards die many times before their deaths,
The valiant never taste of death but once.

In Severus Snape’s case, he at first seems like a coward for example in the last book he duels defensively against professor McGonagall even though he is a brilliant duellist. He was in sense a coward before Lily’s death. He didn’t have the courage to correct his ways to stay in Lily’s favour, but after her death he finally understood why she had not forgiven him for calling her a Mudblod. Still, there is a method to his madness and in the end it is discovered that he was the bravest man I ever knew, as Harry Potter said to his son Albus Severus Potter in 2017.

The course of true love never did run smooth.

What a perfect quote to describe the relationship and life of Lily Evans and Severus Snape. Severus’ life was constant turmoil, because his love towards Lily and inability to act on it and mend his ways.

The quality of mercy is not strain’d,
It droppeth as the gentle rain from heaven
Upon the place beneath. It is twice blest:
It blesseth him that gives and him that takes.

This is where Severus many times failed and why his relationship with Lily fell to ruin. He didn’t understand the concept of a true friendship, even though one can never deny that his friendship with Lily was true. Being sorted into Slytherin biased him very quickly even more in who are considered friends. This is shown very well in their argument in Severus’ memories where he defends his “friends” to Lily about a prank.

Severus’ friends in Slytherin, future Death Eaters, do give Severus a sense of belonging to a group, but that is the only thing that the group ever gives him, since instead like real friends, their presence in his life drives away the only person that truly cares for him.

So wise so young, they say do never live long.

I wouldn’t exactly call Severus Snape wise, but since this quote is from Shakespeare it can be taken more figuratively. Severus was intelligent, but did indeed gather a certain amount of wiseness after Lily died by the hands of Voldemort. He had become a double agent for Dumbledore sometime before, when Voldemort had decided that Harry Potter, the son of his beloved Lily, was his adversary.

He died at the young age of 38 by the hands of Voldemort, ironically not because Voldemort had figured that Severus’ loyalties lay elsewhere, but because Severus’ deception had been so good that he had basically outwitted himself.

Or, if there were a sympathy in choice,
War, death, or sickness did lay siege to it,
Making it momentany as a sound,
Swift as a shadow, short as any dream,
Brief as the lightning in the collied night,
That, in a spleen, unfolds both heaven and earth;
And ere a man hath power to say “Behold!”
The jaws of darkness do devour it up:
So quick bright things come to confusion.

This quote is particularly descriptive when it comes to the Half-Blood Prince. His life was molded with war and hatred from home and around him as he and Lily went to school together. As J.K. Rowling said: Lily might have fallen romantically in love with Severus, if he hadn’t been so enthralled by the Dark Arts. The last two lines: “The jaws of darkness do devour it up:/So quick bright things come to confusion.” Severus is a very intelligent individual, but he never was good with relationships even when it came to Lily.

This confusion is clearly shown in the fact that Severus didn’t really understand how to mend his friendship with Lily and what he was doing wrong. This confusion began to subside after Voldemort had decided that Harry Potter was the target of the prophecy Severus had overheard and completely disappeared after her death, even though he was still unable to make mends by directly being friendly to Harry.

It is widely considered that the reason Severus sought after the Dark Arts and to become a Death Eater was, because he wished to become worthy of Lily. With this biased view he actually pushed her away instead of reeling her in, so to speak.

Maybe without the war things between Lily and Severus would have been different. This is a thing we will never know for sure, but we can speculate. I think even though they might have not become a couple, the major fall out of their friendship could have been avoided.

Close pent-up guilts,
Rive your concealing continents, and cry
These dreadful summoners grace. I am a man
More sinn’d against than sinning.

How better to put how Severus Snape feels inside than the words of the tragic King Lear?

Together with all forms, moods, shapes of grief,
That can denote me truly. These indeed seem,
For they are actions that a man might play;
But I have that within which passes show,
These but the trappings and the suits of woe

Like Hamlet, Severus has lost someone very dear to him and his life’s actions are to honour the memory of Lily.

Yond Cassius has a lean and hungry look,
He thinks too much; such men are dangerous.

It might be that Cassius has a lean and hungry look in Shakespeare’s play, but it is also Severus Snape that thinks a lot which he hides behind bitterness and Occlumency. In the end Severus is the one to turn the course of the war with his actions. He is a very dangerous man to both sides, but his ability to hide his true feelings made him truly the most dangerous man ever. That and he had nothing to lose, since he had already lost everything.

Let me not to the marriage of true minds
Admit impediments. Love is not love
Which alters when it alteration finds,
Or bends with the remover to remove:
O no! it is an ever-fixed mark
That looks on tempests and is never shaken;
It is the star to every wandering bark,
Whose worth’s unknown, although his height be taken.
Love’s not Time’s fool, though rosy lips and cheeks
Within his bending sickle’s compass come:
Love alters not with his brief hours and weeks,
But bears it out even to the edge of doom.
If this be error and upon me proved,
I never writ, nor no man ever loved.

What’s gone and what’s past help
Should be past grief.

It should, shouldn’t it? How we all wish we could turn back time in some cases to fix things. This is probably to in the case of the Half-Blood Prince, but we know very well that it is impossible. The grief Severus has for Lily is so powerful it cannot be penetrated in any way, but nothing can be done to change it.

I am a student in a northern country. I want to improve the world and show it's beauty, maybe provoke your thoughts and entertain. View all posts by copperleafsong

This site uses Akismet to reduce spam. Learn how your comment data is processed.